At a recent event for racial justice I attended, I saw panelist Shelly Tochluk (author of books Witnessing Whiteness and Living in the Tension) speak on the white nationalism recruitment strategies being used nowadays.

Shelly spoke right after another panelist: a male ex-white nationalist who told his story of being recruited into a white power group while being a kid living on the streets, so her remarks were especially striking.

The short version of her message was that these white power groups prey on kids who are vulnerable, and then methodically radicalized them into violent white supremacists. I haven’t been able to stop thinking about it.

A few things it’s important for you to know about how white nationalist/supremacist groups recruit new members:

Recruiters go into mental health forums to find kids struggling with depression and trauma, as well as video game chatrooms and anti-feminist groups like incels and The Pickup Artists, where boys just want to learn how to get girls. Like all predators and manipulators, the recruiters forge a connection with their prey first, build trust and rapport, and don’t push their agenda too early.

Over time, they begin the process of gradually introducing and normalizing more and more radical ideas and racist rhetoric, eventually framing white nationalist terrorism as acts of both heroism and survival. 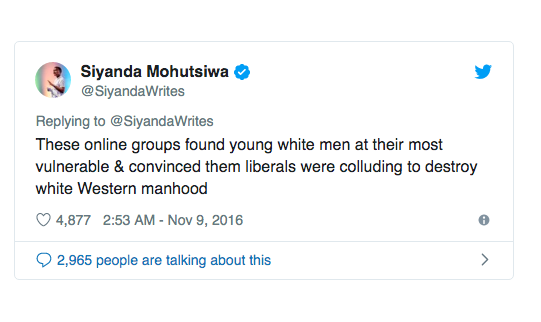 It’s important to note here that white power groups believe immigration and the liberal agenda are threatening to replace them. Their desire to incite a violent race war is, from their perspective, about saving white civilization.

But back to recruitment.

The manipulative (but effective) radicalization process used by white nationalist recruiters looks almost exactly like the process of radicalization seen in groups like ISIS or Al Qaeda.

Think about that for a moment.

This is how otherwise “good white kids” from suburban communities end up committing acts of white nationalist gun violence. Recruiters, like gangs, prey on kids who are vulnerable to wanting a place to belong; a place to be respected, fit in, and make a difference in this world; a place that offers a sense of safety, community, identity, and meaning.

Once they find that kid, they use globally tried-and-true strategies of manipulation to radicalize them. (If you’ve ever been in an abusive relationship, you might be familiar with how a gradual escalation of boundary-pushing can normalize behavior you previously never would have dreamed tolerating. This is very similar.)

We don’t usually think of violent white supremacists this way, as kids who just wanted to belong to a community and feel valued and important. It’s much easier to imagine that the recruiters scour the internet looking for already-racist assholes, and already-violent crazy people.

Facing the reality of who these kids are when they get recruited could not be more important.

We need to talk about why so many kids, boys especially, are vulnerable to messaging about belonging, meaning, and identity. We need to acknowledge how much easier a boy will be to manipulate if he’s traumatized or isolated, dealing with mental health issues, or struggling to connect with peers or girls/women.

White nationalist recruitment is more clever, manipulative, and appealing than we want to believe.

Imagine being a young white boy who feels like “real men” are being shamed and erased in our “soft liberal culture,” and wants to see a return to the times when men could be heroes, fighting with their brothers for what was right. Imagine he comes across content saying that black and brown people are replacing him, and that our culture hates white people and whiteness. Is it so surprising this kid would find a community of men who seem to value and respect him, want him to join them, appealing?

We are a culture whose needs for community, connection, and belonging are going desperately unmet for too many people, not to mention the needs for meaning, purpose, and a sense of positive self-identity.

We are wired to want these things, to crave these things, and to suffer when they’re missing from our lives. Some kids get lucky and find these qualities in their families, sports teams, friendship groups, or church communities. But many don’t.

A deeply human truth is that without a sense of belonging (and an understanding that people value and like us), we become vulnerable to everything from white nationalist recruitment, to gangs, to eating disorders, to addiction, to abusive relationships, to suicide.

For anyone who wants to read Shelly’s original remarks, you can find them in her blog post about the experience here.

Her point in the end was that anti-racism allies and activists have a responsibility to understand this vulnerability, and articulate more clearly to young white kids that there is belonging, safety, and meaning available if they join the fight against racism, rather than for it; that their voices and gifts will be valued, respected, and received with gratitude if they become allies instead of terrorists.

I completely agree with that sentiment, but today I want to take it one step further, and suggest that we all look at our lives and see where we are vulnerable, and to what we fall prey.

How do you feel when your “connection and belonging” tank is overflowing, versus when it’s bone dry?

How do you feel after deeply bonding with like-minded people for hours or days, going deep and getting vulnerable, and knowing people appreciated you– versus having superficial small-talk with the other women at the school drop off, or after spin class, or in the office?

How do you feel when you experience deep, raw, powerful intimacy with a partner versus impersonal or distracted time together?

We are far more resilient, stronger, healthier, happier, and less vulnerable to manipulation (and unhealthy numbing/distracting behaviors) when our connection tank is full. We are far more likely to feel like we’re thriving when we’ve been properly nourished with eye contact and deep conversation, when we feel seen and heard, when we feel like we belong, and when we know that our presence offerers value and delight to others.

I believe most of us need far more connection than most of us are getting in today’s app-based culture.